skip to main | skip to sidebar

I had seen someone (2nd generation trainer) do 'so called Parelli' with a horse at a show two years ago - I was brand new to owning my horse and a year into riding.... I decided that Parelli was no good (the horse looked scared stiff of the whip) and I promptly ignored everything about Parelli, UNTIL a month ago.....

I was watching a video testimonial about coverall arenas - and Pat Parelli had one - it showed some demos and wow I was converted. I thought "that's what I want for me and my horse!!"

I started Level 1 home study and this weekend I started Level 2... I am still working on the riding in L1 - that takes longer for me because we have no enclosed area where I graze so I need to go out to practice Pushing Passenger etc. Also if my co-grazers and YO saw me riding with a rope halter and one rope I would get so many "What the hell are you doing" looks.!

My horse didn't have any major problems.... but things I wanted to fix were;
okay - after typing that he sounds really bad hey? But they were all quite little things and apart from the shows - mostly manageable.

But I realised I was doing what Linda said she was doing... I would only ride between 12 and 4pm, and avoid riding with others with excitable horses, I was extremely picky about who else I rode out with - their horse had to be bombproof, and the ground stuff I guess just slowly got worse over time so I didn't notice it.

I am very very very impressed with Parelli - and also with the standard of their home study - well worth every cent... best home study course I have done.

So - after L1 DVDs saying I must move on to L2 ground work while I am completing the L1 riding - I thought - ok - why not?! The exchange rate is awesome at the moment.

So - after watching the beginning of L2 I went out with Garbo today. Wanted to go to a place that had some obstacles - we have NONE at our grazing.

He normally hesitates just before the ramp of the float and then I lead him on. He sometimes takes a look around and then comes on. For some bizarre reason (it was raining) I thought I would use the Send to send him ahead of me.... he started then turned away..... so I led him on but I had the carrot stick in my hand still (don't normally use a whip or anything when loading) and he ran out

After all the things I learned from the L2 dvds so far I put so many into use today.....

Normally I would have got angry....

I stayed really calm - smiled and patted him.... and asked him again - again he ran off (turned in the float and ran out front ways)....I had the 12ft line and started to try and stop him by yanking the rope, and remembered the dvd and just followed him off... he stopped!! Yay.

More patting and smiles.... (gee that helped me not get angry and frustrated)..... and then I led him on again (save the send for another day me thinks).... and he stayed on.... and he was good going on for the return journey too....

Painting I got for my birthday from George

Responsibilities of the horse

Responsibilities of the human

Garbo is my LBI and just fabulous. One could not ask for a cooler horse than him! Sure he challenges me but that is awesome. He teaches me so much, and makes me laugh all the time.

I have had Marachino since he was 16 months old (in Feb 08). He is RBI and very curious, and very smoochy. I hope to start him myself when I am L3. 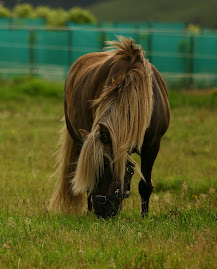 I was lent Coco by a friend, to keep Maraschino company when I take Garbo out. Sadly he has been abused (my friend rescued him) and we are slowly helping him become brave and show his true curious cheeky personality. 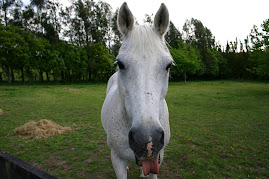 I adopted Blue in December 04, he was my first horse and very sweet. Sadly he died in Jan 2008 of colic suddenly. RIP gorgeous Blue. 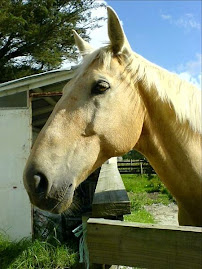 While I was in Cairns 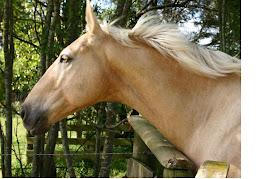 Wind in his mane 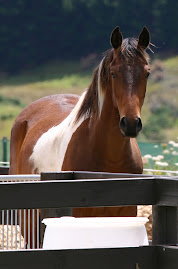 Parelli sayings I use and love